A brief history of Opc 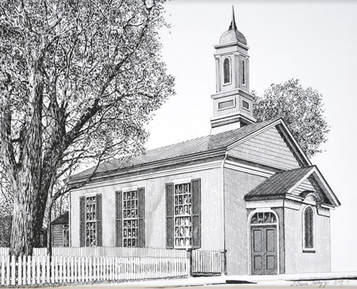 The Orange Presbyterian Church on Byrd St., ca. 1900.
Answering the call
​On November 8, 1845, West Hanover Presbytery received a request from “a number of citizens of Orange and Madison Counties, who were desirous of having a Presbyterian church organized within the bounds of said counties,” In response, the Church of Orange and Madison Counties was organized,  with twenty-two charter members.  A number of the petitioners were from families who had been strongly influenced by the ministry of James Waddell, the blind preacher.

The three churches
The first minister of the Church of Orange and Madison Counties was Reverend Daniel Blaine Ewing. He served the church from 1845 to 1864.  In 1854-1855, three church buildings, almost identical in size and style, were erected. One was in Gordonsville, the second in Madison, and the third in Orange.

The Civil War years
The church grew and prospered in the early years.  Then came the Civil War. Rev. Ewing and the congregation played an active role in caring for the families of the church and the soldiers who were encamped in Orange County.
Rev. Isaac W. K. Handy and the Old Manse, 1868 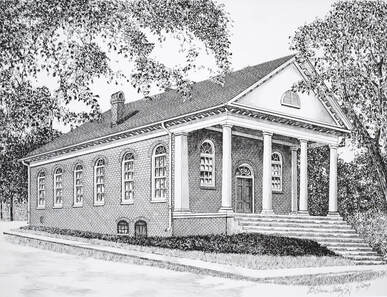 The second Orange Presbyterian Church building, at the corner of West Main and Caroline, ca. 1920.
Division and growth
The Madison congregation became a separate church in 1858.  In 1870, the  Gordonsville congregation followed suit.

Dr. Andrew G. Grinnan and Henry T. Holladay, two elders from the Orange Presbyterian Church, led a campaign in 1874 to erect a church at Rapidan. It was to be a memorial to James Waddell, still held in high regard locally.  In 1876, West Hanover Presbytery organized Waddell Presbyterian Church.

The churches in Orange, Virginia
The first Presbyterian Church building erected in the town of Orange was located on Byrd Street.  The congregation worshipped there until 1910.

At that time, a new structure was erected at the intersection of West Main and Caroline Streets.  An education wing was added in 1923.  In 1952, this addition was expanded to its present size. 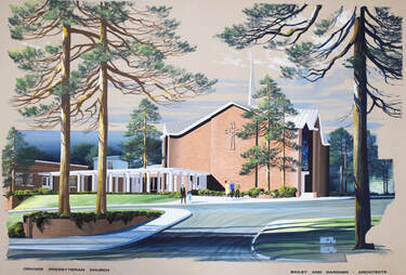 Architectural drawing of the new sanctuary, ca. 1970.
The modern church
The sanctuary now used by the congregation was erected in 1971.  The new structure was designed by  Bailey and Gardner. The architects, J. Russell Bailey and Judson "Bugs" Gardner, were both members of the congregation.

In 1991, the congregation renovated the old sanctuary for use as fellowship hall.  At the same time, the education building was also renovated and modernized.

175 years and counting!
Since 1845, Orange Presbyterian Church has been led by a distinguished group of dedicated ministers and lay persons.  Its ministry has positively influenced the Orange community and the world beyond.

In between the lines of recorded facts and figures run the faith and life of a people who value worship, nurture, and service.
​
​We, as a church family, are on the threshold of a very hopeful future as we continue that legacy.  As we celebrate our 175th anniversary, we celebrate our heritage and our hope for the future of our church family.
OPC Timeline 1908-1923
Orange Presbyterian Church  |  162 W. Main Street, ​Orange VA 22960  |  Map  |  540.672.4240
Privacy Policy  |  Copyright 2021 Orange Presbyterian Church